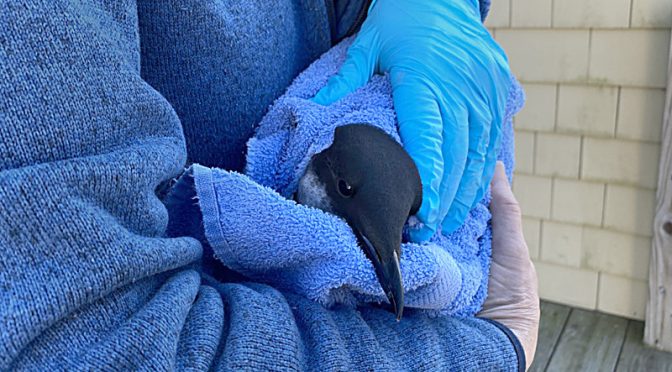 With the beautiful weather yesterday, Phil and I thought we’d take a morning hike at Nickerson State Park. As we were driving down Cliff Pond Road we saw a large bird in the middle of the road. It couldn’t fly and was floundering about. (Click on blog link to see other photo and read full story.)

We stopped the car and got out. It was a Thick-Billed Murre which is a sea bird usually found in the Arctic waters but occasionally found in this area during the winter months. What was it doing in Nickerson State Park? 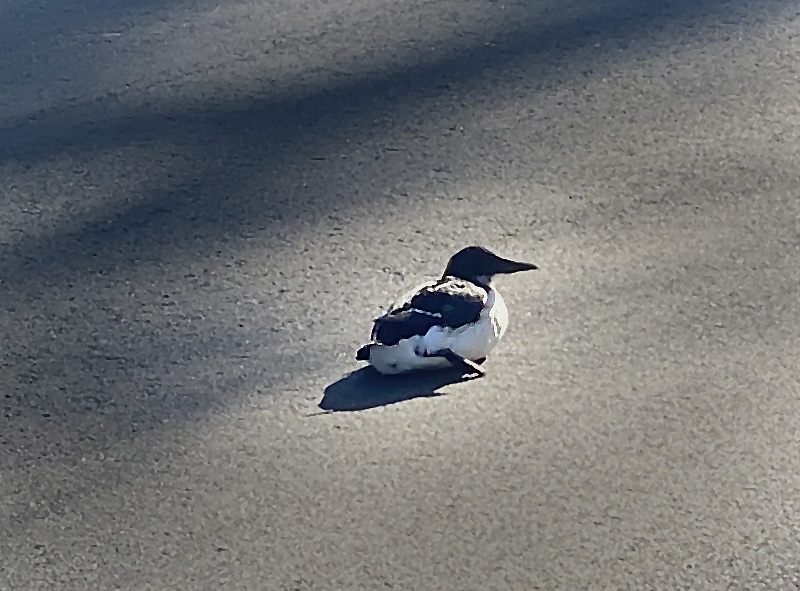 Just as we were deciding what to do, a huge milk truck came barrelling down the hill and right at the bird. Phil stood in the middle of the road and put his hands up as if to say Stop! The truck stopped and, as the driver was getting out, he was putting on a pair of rubber gloves. He asked what happened.

We explained to him that the bird was injured and couldn’t fly and we were trying to catch it to bring to Wild Care in Orleans. Wild Care Cape Cod is an animal rehabilitation facility that helps sick, injured and orphaned wildlife. We had a large towel that we were going to throw over the bird. Just as we had it cornered the driver told us that he was a Falconer, a person who trains falcons, hawks and birds of prey.  What are the chances of that?

I nestled the bird in the towel and held it as we drove to Wild Care. Jennifer, the  Animal Care Coordinator and Wildlife Rehabilitator, helped us get it out of the car and inside. We told her our story and she said that the bird looked dehydrated, hungry and scared.

Jennifer told us that this was their first Thick-billed Murre of the season at Wild Care. I left my phone number and asked that they call me when the Murre was being released. We’d love to be there for that!

What an incredible experience! It couldn’t be in any better care than with the staff at Wild Care Cape Cod which is truly an amazing place!

5 thoughts on “Rescue At Nickerson State Park On Cape Cod!”