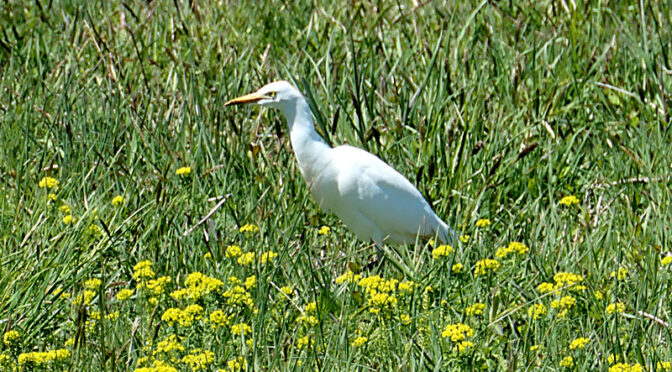 Phil and I were finishing a hike at Fort Hill the other day when we saw something white in the tall grass among the yellow flowers. It looked like an Egret, but what was an Egret doing in the middle of a meadow? We usually see them on the salt marsh on near the shore. (Click on blog link for other photos.) 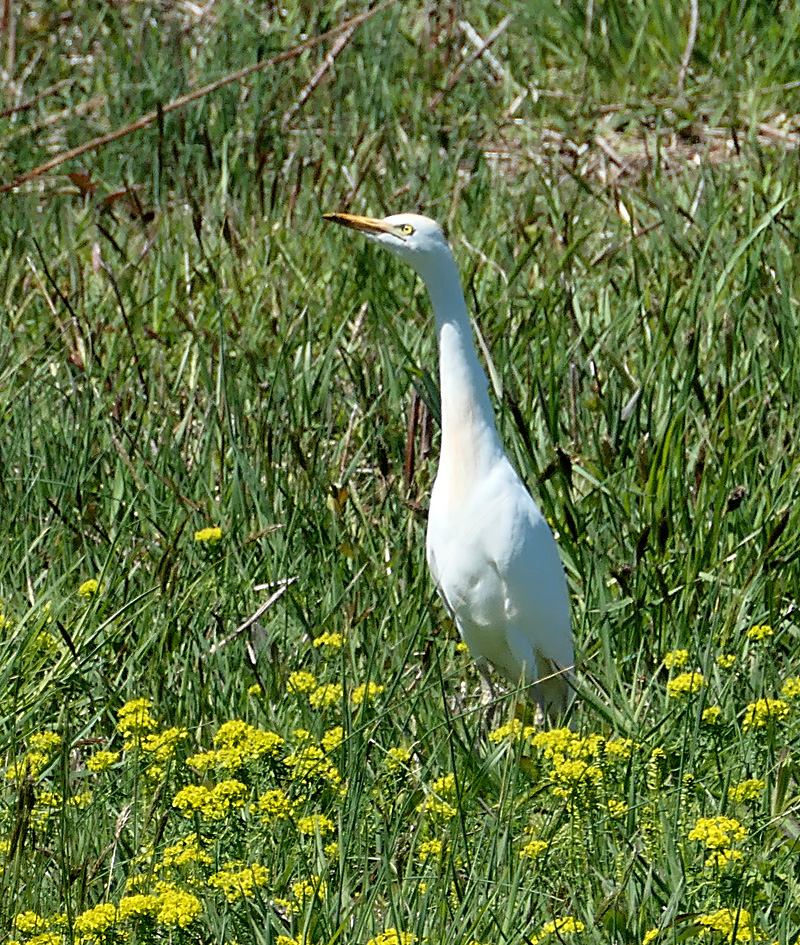 We clicked away and then went home and did some research. It was a  Cattle Egret which we had only seen once before in a little overflow pond a few years ago here on the Cape. “Cattle Egrets stalk insects and other small animals on the ground in grassy fields. They are much less often seen in water than other herons.” 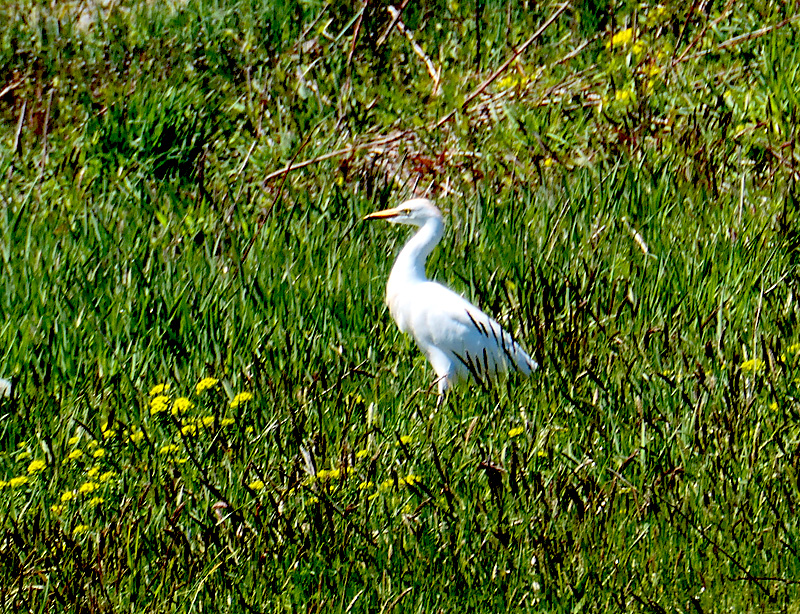 An interesting fact is how it got its name:  “The Cattle Egret forages at the feet of grazing cattle, head bobbing with each step, or rides on their backs to pick at ticks.” Pretty cool, don’t you think? 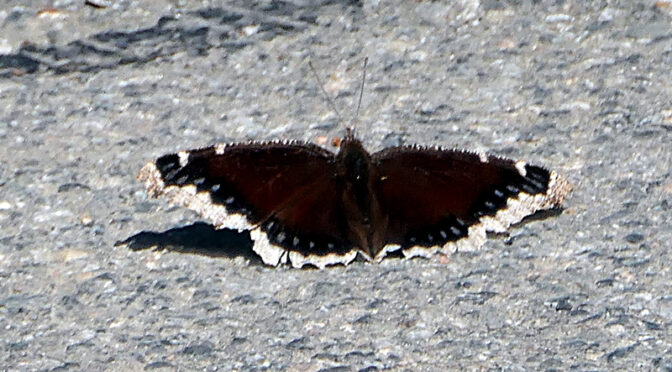 I was so surprised to see this beautiful Mourning Cloak butterfly flitting around our yard. I saw them frequently when we lived in Colorado, but I had never seen one here on the Cape.

A Mourning Cloak is a large butterfly with a wingspan of around 3″. Its color is predominantly  deep maroon with a marginal row of violet-blue marks and yellow borders.

Have you ever seen a Mourning Cloak butterfly? Beautiful butterfly, don’t you think? 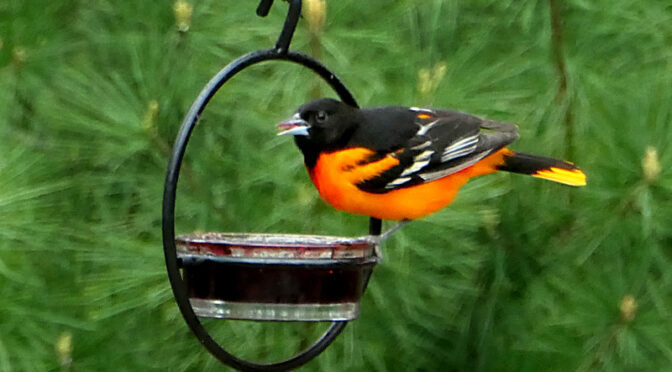 The Baltimore Oriole is such a beautiful, vibrant orange and black bird that we are so lucky to have in our yard… to watch them eat their beloved grape jelly and to listen to their distinct calls… and maybe raise a family?! 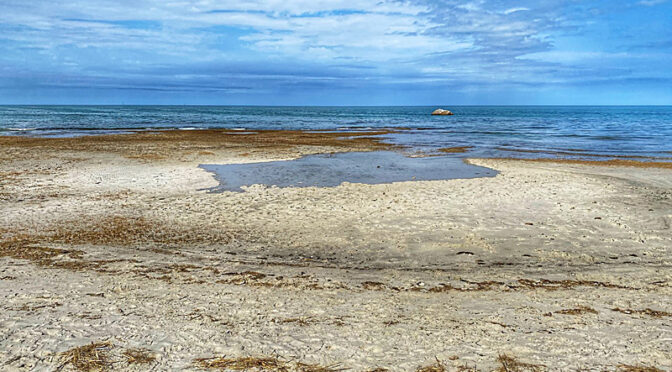 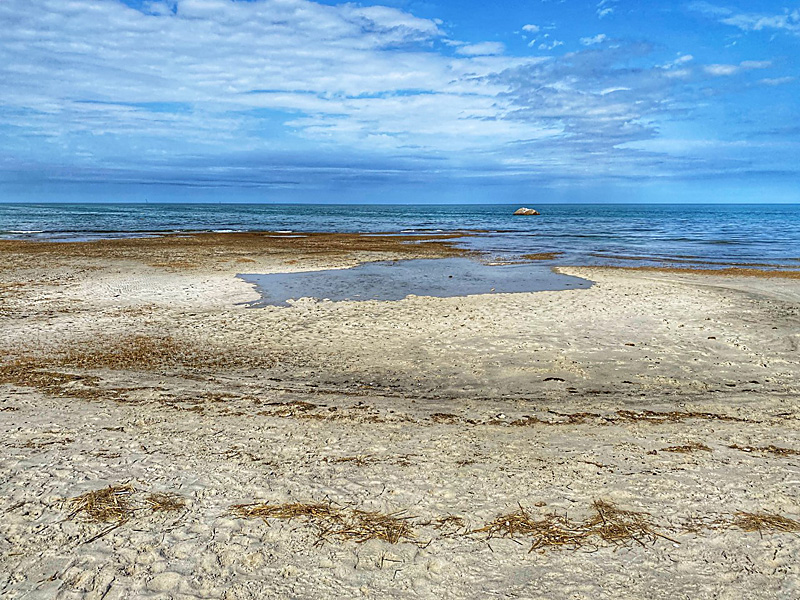 I was taking a walk along the beach the other day when the tide started coming in. I thought it would be interesting to take 3 different photographs, each about 15 minutes apart so that you can see just how fast the tide comes in on Cape Cod Bay. 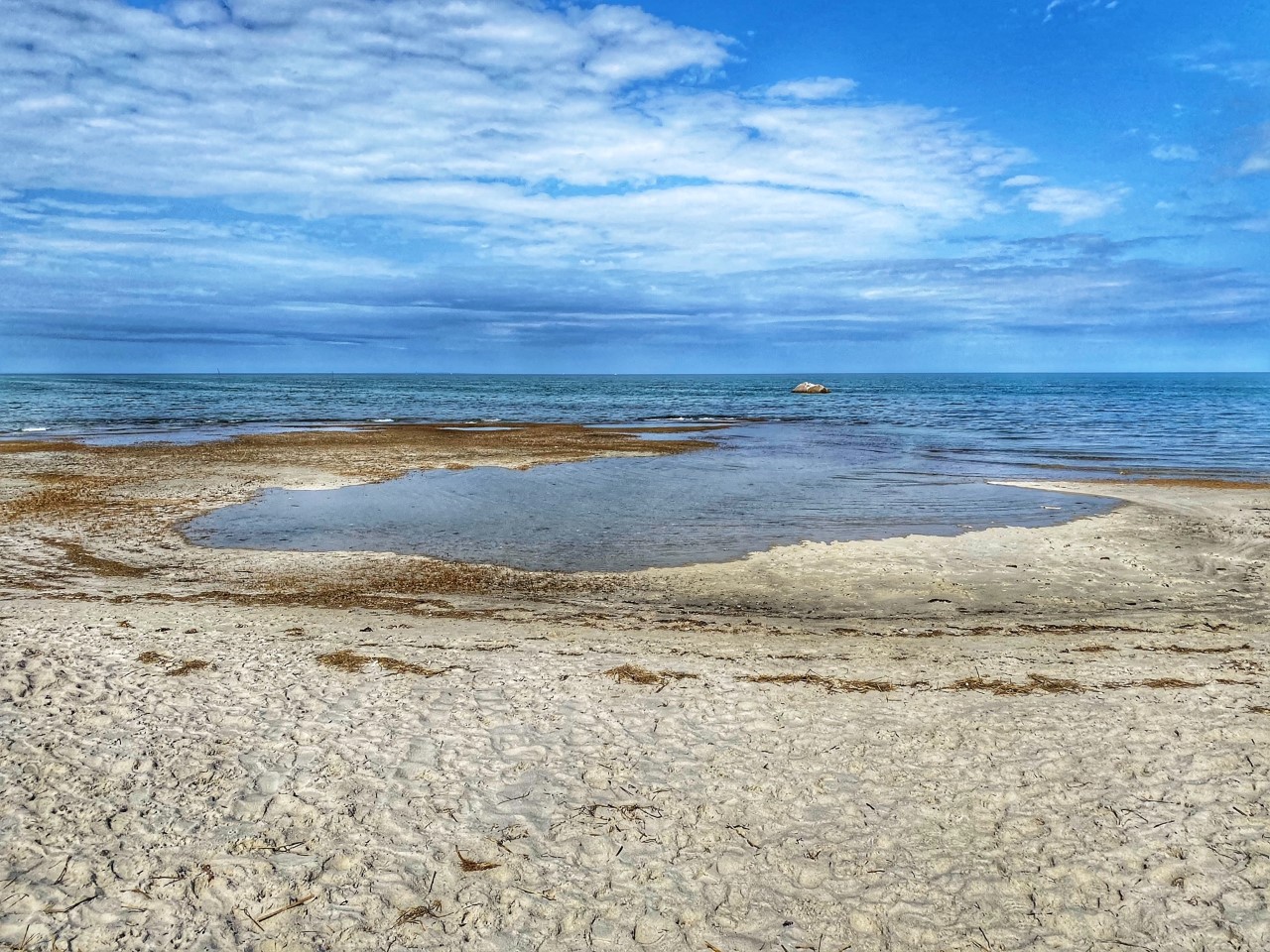 In the first photo, you can see the water started to meander in to shore. In the 2nd photo, it has gotten a lot higher. 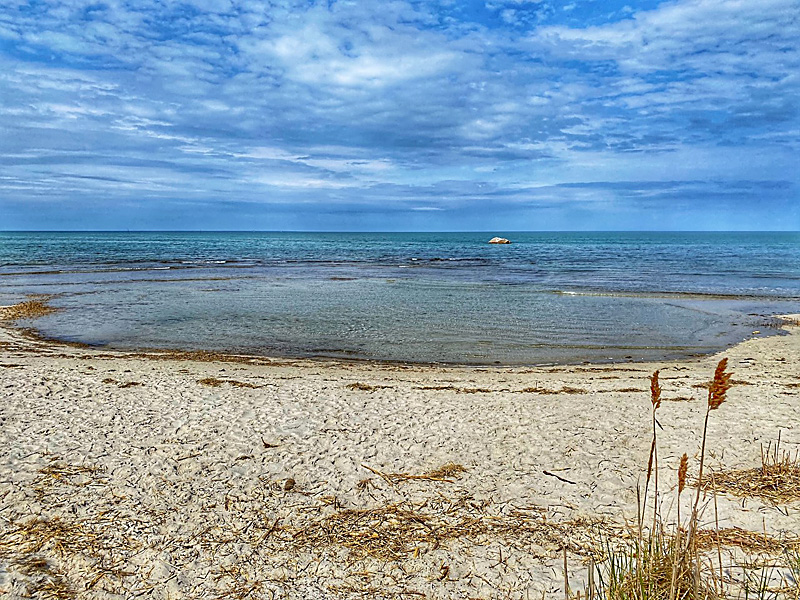 In the last photo, the water is way up on the shore. The tide swings on Cape Cod Bay are just amazing! 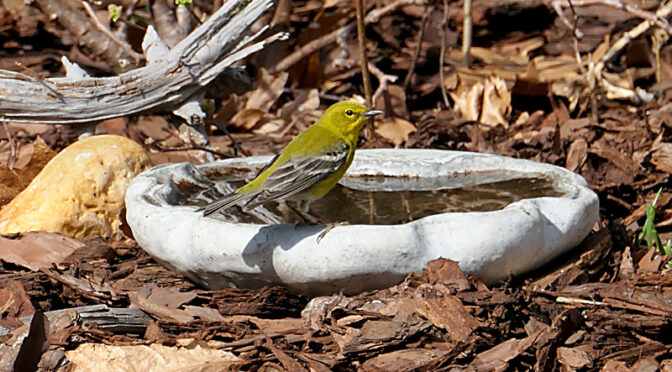 This little Pine Warbler was absolutely adorable as he took a bath in our mini bird bath. (Click on blog link for other photos.) 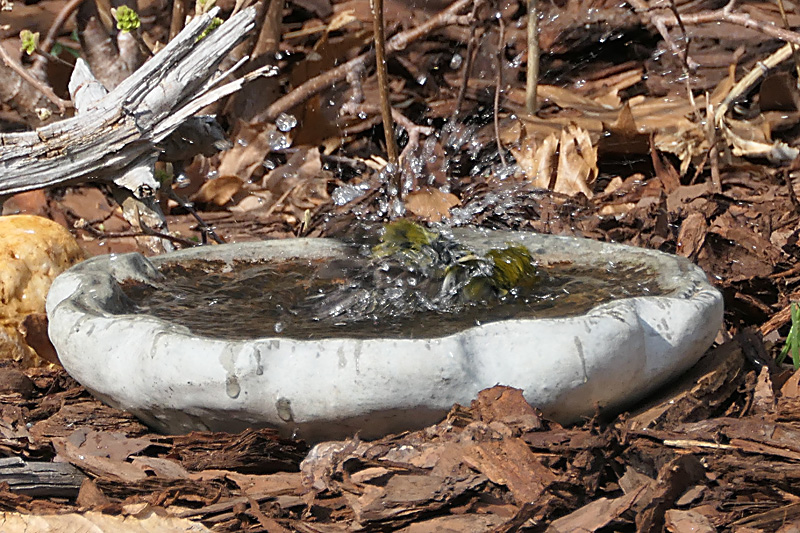 He would dunk under while splashing about, come up, shake his feathers and dunk under again. 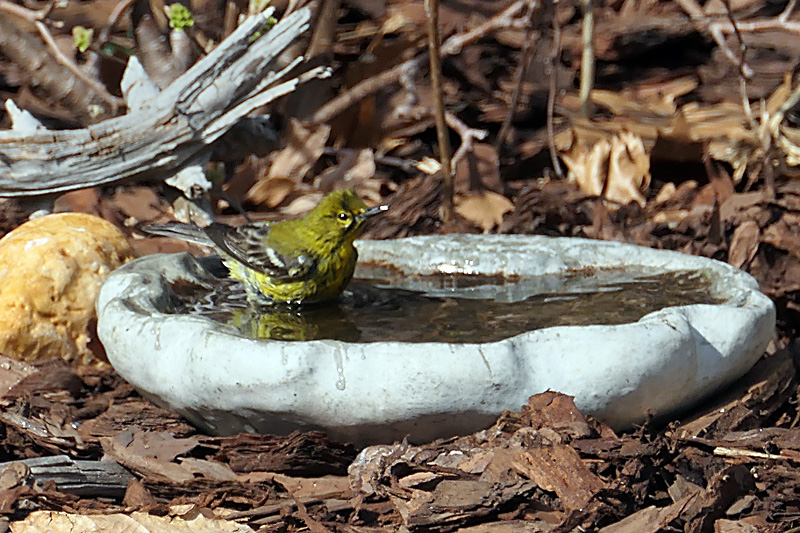 It doesn’t get much cuter! 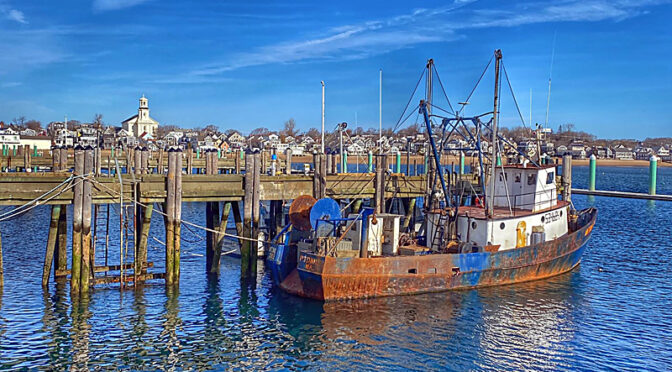 I love  the old fishing boats in the harbors on Cape Cod. This one at the Provincetown docks was especially interesting as it looks pretty old and rusty.

I wonder how long its been fishing in the waters off of Cape Cod? It would be fun to hear some of its stories…