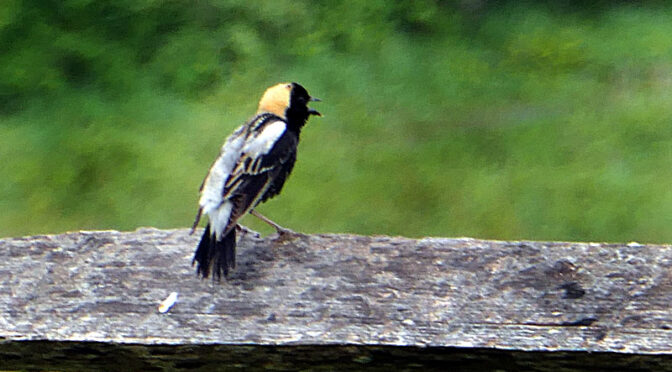 It was such  treat to see this Bobolink land on the fence at Fort Hill the other day.  It was pretty far away but we were able to identify it and get a couple of photos. It was the first one that we’ve seen on the Cape and the first one that I’ve seen in many, many years. (Click on blog link for other photo.) 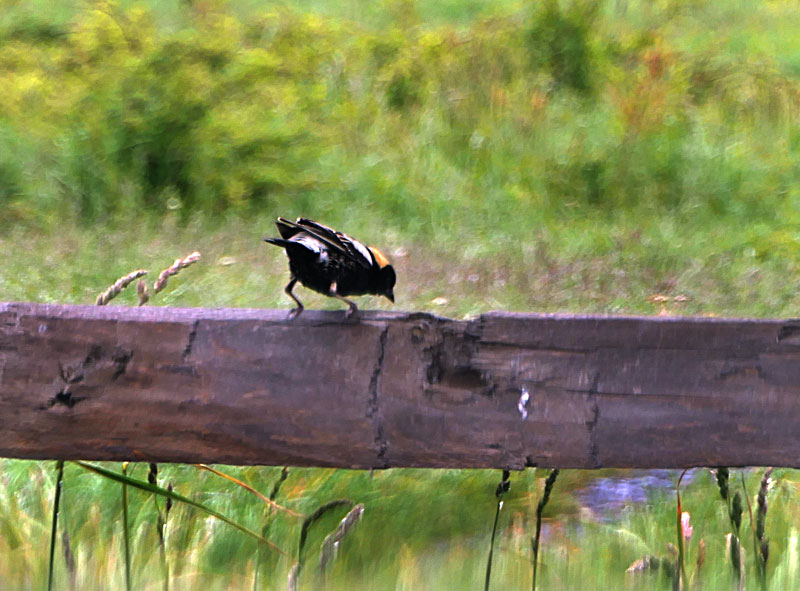 I found this interesting tidbit on the internet: “The Bobolink’s common name originates from a poem written by William Cullen Bryant back in the late 19th century. William wrote about a bird he then called Robert of Lincoln. This name was shortened to Bob of Lincoln, and finally became the name it has today: Bob-o’-link.”

Have you ever seen a Bobolink or  heard its call?? 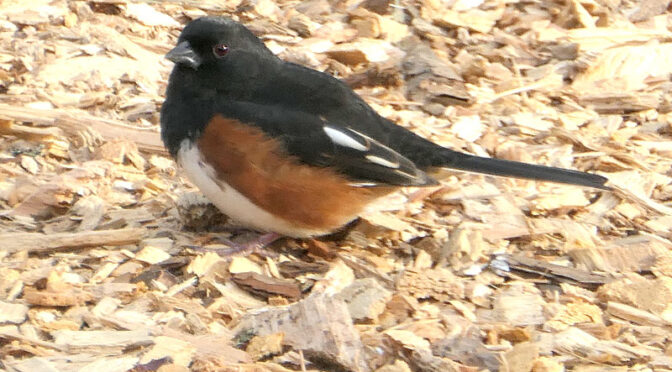 I remember growing up in Connecticut and seeing Eastern Towhees everywhere. My Dad taught me at a very early age to recognize them by their song, “Drink your tea!” (Click on blog link for other photo.) 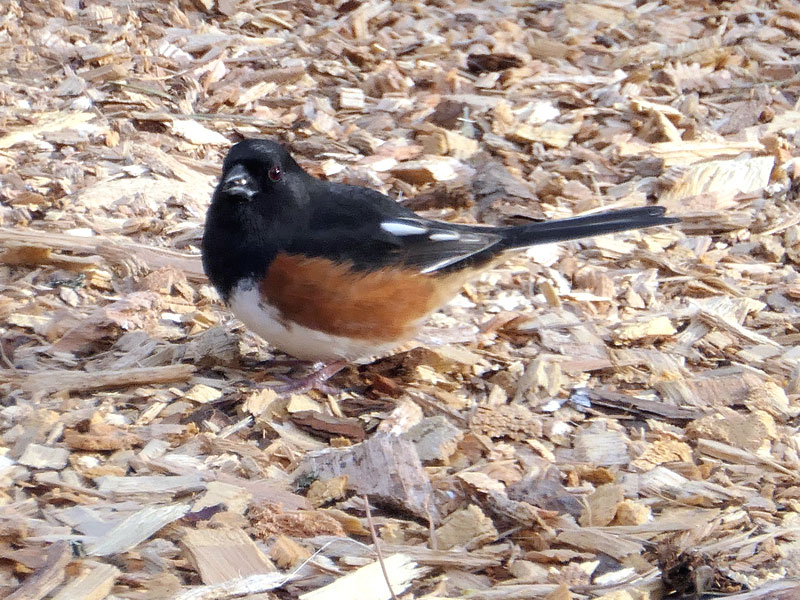 I had seen an Eastern Towhee only one other time here on the Cape in the past few years so I was delighted to see this little guy foraging around in our yard.

The Eastern Towhee is a large sparrow with black upper parts, hood and upper breast, rufous-colored flanks, and white underparts. It forages on the ground and in low vegetation for insects, acorns, seeds and berries. You won’t see him at your feeder.

Have you ever seen an Eastern Towhee? 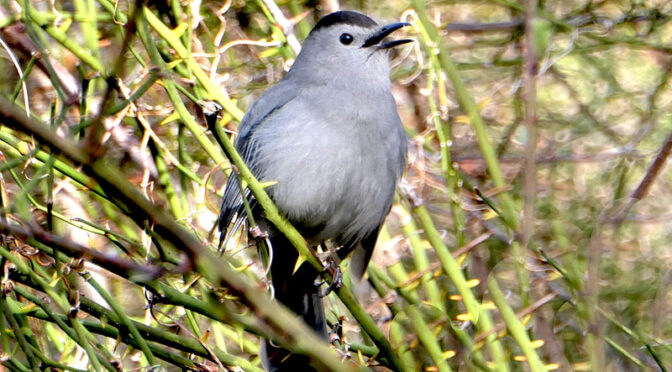 I love it when the birds start migrating back to the Cape for the summer. One of my favorite birds is the Catbird. I saw this Catbird singing away on the prickly vines on the Red Maple Swamp Trail.

Have you seen a Catbird yet this season? 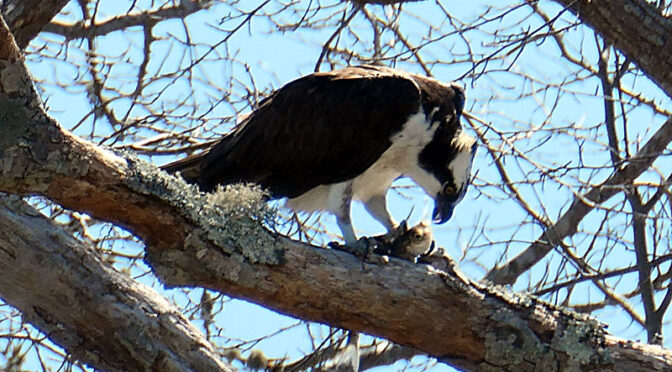 We were so excited to see this pair of Osprey making their new home on top of this pole not too far from our house. They were bringing in some nice branches which they placed very strategically on the nest. (Click on blog link for other photos.) 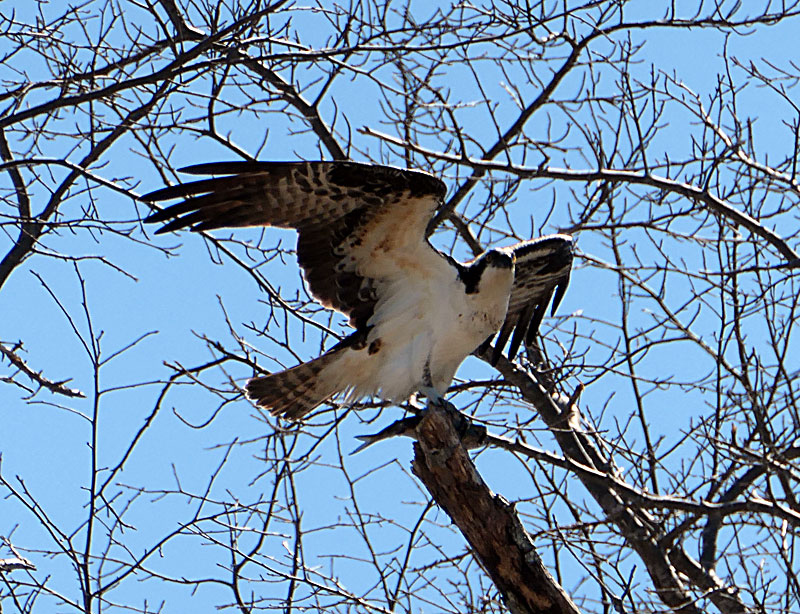 They were both chirping away as the male was bringing in fish for the female. Or they would sit in a nearby tree and enjoy their meal. 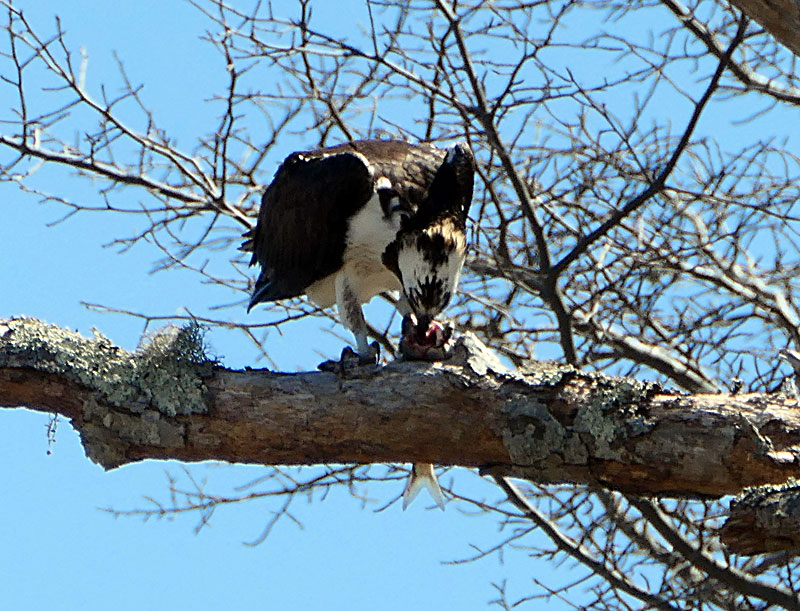 I took these photographs the first day I saw them, thinking that I’d go back and get some better ones on another day. They were so easy to see. 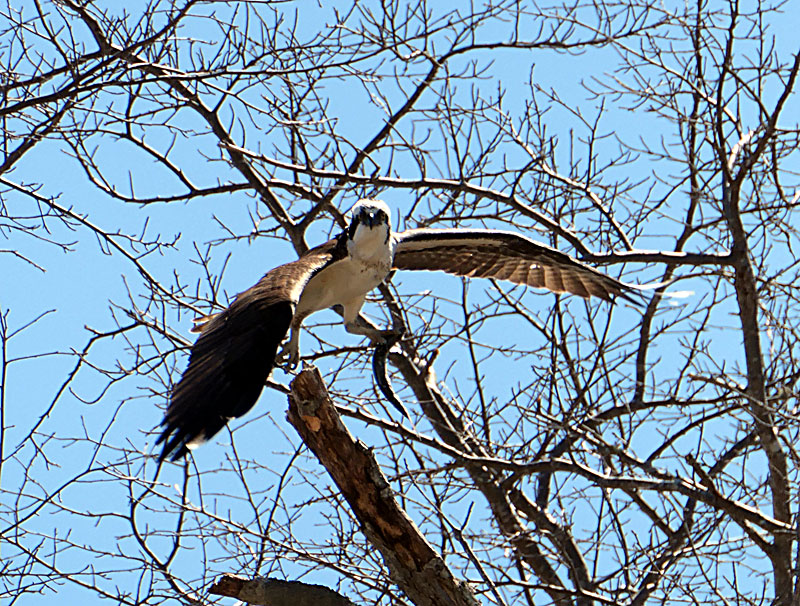 We went back a few days later and the nest was gone, replaced by a 1/2 of a large cylinder that was now sitting sideways on top of the pole so they could not put a nest there as it was no longer flat. I saw one of the Osprey land on the 1/2 cylinder for a few moments while the other one flew above, chirping way. It quickly flew away. 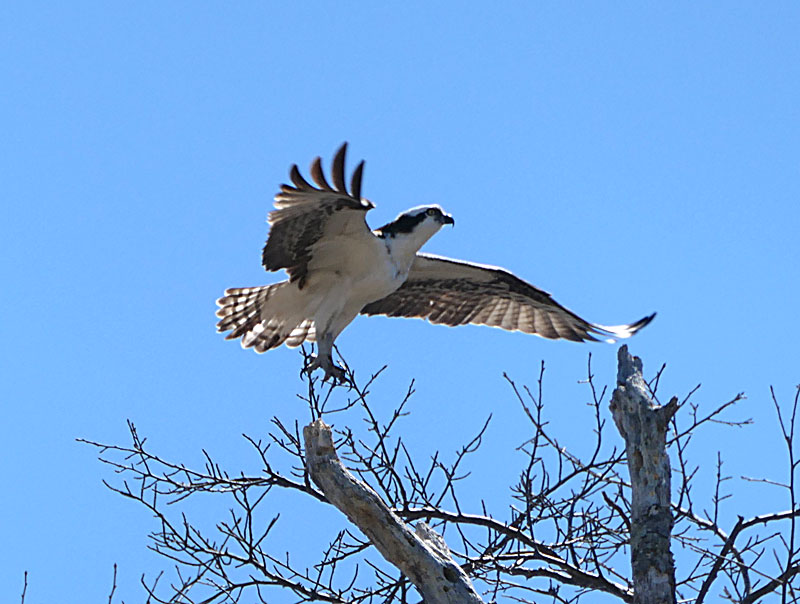 Our excitement from a few days before was replaced by a great sadness that they were looking for their nest to have their babies and it was no longer there. 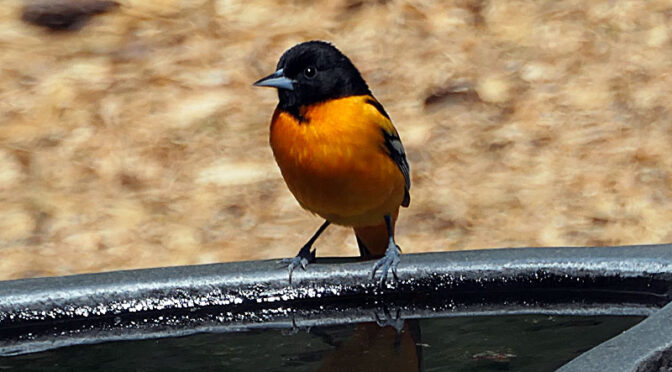 We saw our first Baltimore Oriole of the season yesterday in our yard. What a treat! We look so forward to that every year that we take bets on the date that they will arrive. (Click on blog link for other photo.) 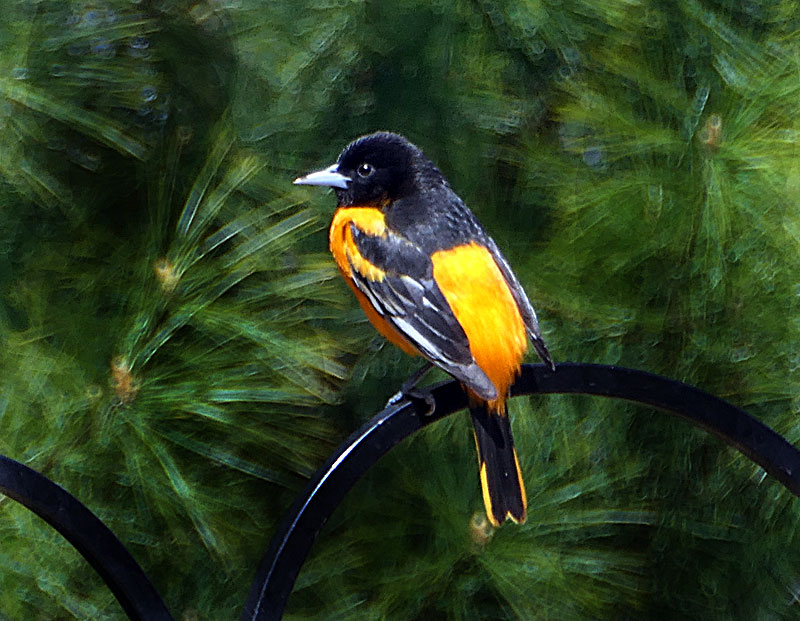 Last year they arrived on May 2nd, so they were a few days earlier this year. Have you seen one yet? Gorgeous bird, don’t you think? 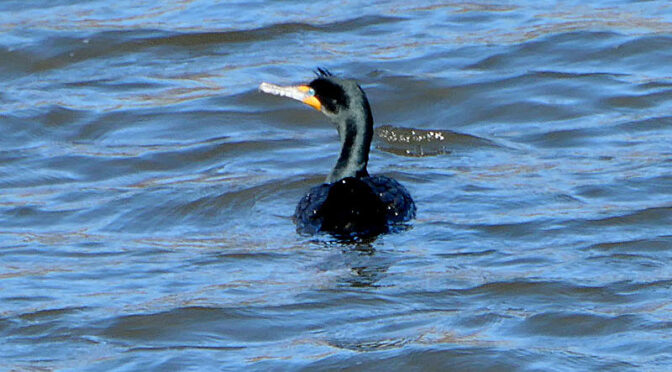 The Double-Crested Cormorants are back on Cape Cod and so much fun to watch as they dip and dive for food. (Click on blog link for other photo.) 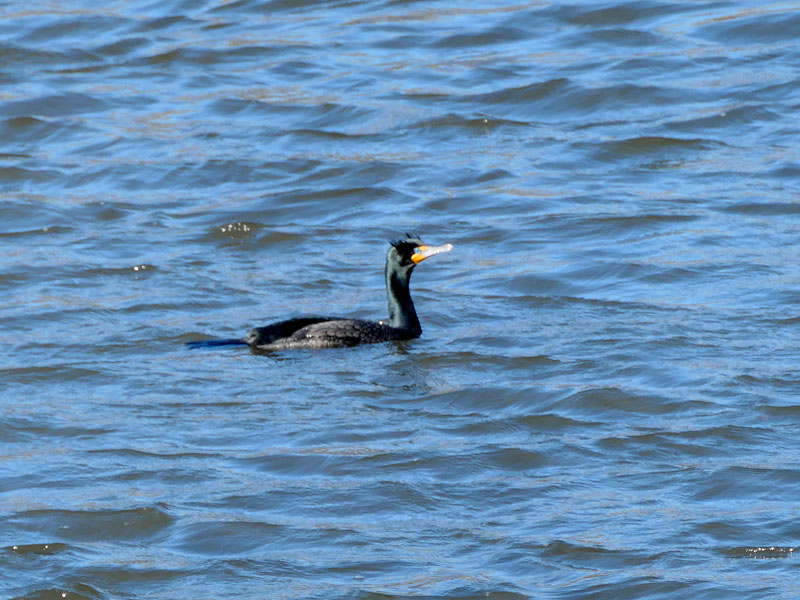 I saw this guy swimming on Boat  Meadow Creek and I just loved how I could see the vivid blue color of his eyes. I’m not sure I have ever seen that before.